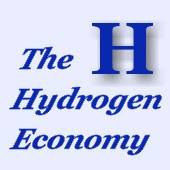 Hydrogen fuel cells constitute an efficient way to store energy and as such they form an important component in our struggle to contain global warming. Hydrogen fuel cells are a convenient and clean way to power cars and supply electricity on demand virtually everywhere. The importance of hydrogen as a technology is huge, as it constitutes the clean and renewable storage compliment to clean and renewable ways to capture energy, such as solar, wind, geothermal, wave and hydro-power.
The Hydrogen Economy is much more than that; it promises to change the fabric of our society. Hydrogen, holds the promise to break up the current cartel of energy suppliers that works hand-in-glove with a military-industrial complex that holds the entire world in a suffocating stranglehold. Hydrogen can clean things up and set the economy free. Hydrogen is the elixer that can remedy our polluting habits to create a better society, without the monopolies, the pollution, the taxes, regulations and the military controls that come with the current ways of supplying energy. Currently, energy is largely obtained from sources that centralize the economy around a single supplier, such as a huge nuclear plant or coal-powered plant. Similarly, oil is pumped up under monopoly conditions and transported in huge tankers, which has created these allmighty oil companies that extend their grip over society through services stations and political lobbying to keep cars polluting the world.
We should look forward to a world in which anyone can capture energy for free in their backyards, from renewable power sources such as solar, wind, geothermal and hydro-power. This energy can be directly stored in fuel cells that are built into heating and cooling systems of buildings, lights, TV-sets, stereo equipment, computers, cars, mowers, scooters, power tools, etc. Wherever you now see rechargeable Lithion batteries used, such as in mobile phones, think hydrogen and you'll get a preview of the bright future that awaits us. Hydrogen fuel cells will enable us to cut the wires through which the puppetmaster controls us now. Hydrogen fuel cells hold the promise to set us free. Let's take a serious effort to give this technology a chance!
Posted by Sam Carana at 9/17/2007 06:39:00 PM 1 comment:

The Future is Electric Cars!

Who killed the electric car? It's an excellent documentary video, a must see! It was released on DVD to the home video market on November 14, 2006.
http://earthissues.multiply.com/video/item/16http://en.wikipedia.org/wiki/Who_Killed_the_Electric_Car%3F

The electric car dates back to the 1830s, when Robert Anderson of Scotland invented the first crude electric carriage. Around 1900, electric cars outsold all other types of cars in America. Why? Because they did not have the vibration, smell and noise of gasoline cars and required neither gear changes to drive nor much manual effort to start (as with the hand crank on gasoline cars). The only good roads then were downtown and most car travel was local, perfect for slow electric vehicles with a limited range.

Now it's time to reinvent the electric car, for its convenience and for the positive contribution it can make in terms of the environment and global warming. Solar power and electric cars is a winning combination. Let me explain. Wind and solar power is not continuous, and this is where car batteries can help out, by storing electricity at times of high supply, to feed electricity back into the grid when supply is low. I can well imagine car batteries both drawing and feeding power to/from the grid at night. Intelligent net metering will assist with this.

How much solar power is needed for all this electricity? How much surface does it take to supply solar energy? The following URL displays an image with red squares showing how much surface needs to be covered in theory by solar power facilities to generate enough electricity to meet the entire demand of respectively the World, Europe (EU-25) and Germany.


In fact, "how much surface" should be rephrased into "how little surface". Solar power alone could well provide enough energy for both our current electricity needs and can supply the additional energy needs to run our cars as well. Indeed, cars need not be bad from an environmental perspective. In fact, the combination of cars and solar power can be a winner for both. Again, let me explain.

Electricity can be stored in car batteries during the day, when cars are parked under roofs that are covered with solar panels that recharge the batteries. That could easily recharge the car battery enough for the owners to drive home and still leave sufficient power in the battery for other use. Note that 70% of Americans drive less than 33 miles per day. Late afternoon, when most people return home, they can plug their cars in at home for their own power use in the evening. Many will even have sufficient energy left to feed power back into the grid, selling electricity at top rates due to peak demand for power in the evening. Even if the battery became fully discharged in the evening, this still makes economic sense, as one can recharge later from the grid (during the night or early in the morning) when rates should be cheaper. Imagine there's a lot of wind during one part of the night. The meter will indicate that this is a good time for empty batteries to recharge. Conversely, when there is no wind in the evening, one will be able to get top dollars for feeding electricity back into the grid, pre-setting the battery to keep enough charge to get to work in the morning. As discussed, the car can then fully recharge from the solar panels on the roof of the parking place at work.

Sounds far-fetched? I'm very impressed with the Tesla Roadster, which has specs that many don't expect from electric cars, specifically an acceleration from 0 to 60 in about 4 seconds and a top speed of over 130 mph. It also looks great! You can recharge the battery at night in your garage and it will cost you as little a $2.50 in electricity for a full recharge.

With the Tesla, you'll be able to drive up to 250 miles on one single charge. This radius is achieved partly with regenerative braking that stores energy produced when braking. Recharging an empty battery with an EVSE system (operating at 70 amps) takes as little as 3.5 hours, but it also comes with a mobile-charging kit that lets you charge from any standard electrical outlet, e.g. in case you get stranded with an empty battery. Anyway, this short recharge time allows one to feed power back into the grid in the evening (when demand is high and supply from solar power sources is low) and still recharge later at night or early in the morning. Indeed, later at night rates are low, so it makes sense to recharge then. If sufficient wind is blowing, supply from wind turbines may be abundant in your area.

Electric cars requires less maintenance, since there are very few moving parts; you don't need to change engine oil, filters, gaskets, hoses, plugs, belts, there's no catalytic converter or exhaust pipe to replace. However, cost still is an issue, the Tesla Roadster 2008 model has a pricetag of $92,000 and the battery pack warrenty is limited (I think it's only warrented for 100,000 miles, while it does cost thousands of dollars to replace). But battery cost is expected to come down in future, while at the same time battery capacity and performance is expected to increase over time.
http://teslamotors.com/

Also have a look at Google's initiative on plug-in cars:
http://www.youtube.com/watch?v=oDjSbWTJbdo
Google still uses plug-in hybrids, but it sets a trend away from using fossil fuel. There are also ethanol-electric hybrid cars; more than a year ago, Saab (General Motors Swedish car unit) already showcased such a car, combining an electric motor with an E85 Ethanol engine.
http://www.forbes.com/finance/feeds/afx/2006/03/23/afx2616065.html
Google.org has issued a request for proposals to the tune of $10 million in order to advance sustainable transportation solutions.
http://blog.google.org/2007/09/drivers-start-your-batteries.html

Let me also pass on some links to the Rocky Mountain Institute in Colorado, at:
https://www.rmi.org/
They envisage a "Hypercar," made of ultralight, super-strong, carbon composite material, which is 12x as strong as steel on impact. Manufacturing cars and trucks using these materials would dramatically increast the range of electrical cars.
http://www.rmi.org/sitepages/pid191.php
http://www.fiberforge.com/
Hydrogen is another way to store energy and is also promising in expanding the range of electric cars.
https://www.rmi.org/images/PDFs/Energy/U02-02_CleanerGreener.pdf (1.59 MB)

In conclusion: Just like we shouldn't rely on any single source of power (we should use wind, hydro, solar power and more), we shouldn't rely on a single way of storing power either. Apart from using car batteries for storage, we could use the Great Lakes as a reservoir not only of water, but also of power. At times of peak supply of wind and solar power, surplus power could be used to pump water back from a lower to a higher lake, in order to use hydro-power at times when supply of other types of power is low. Free markets are good in sorting out which technology works best where and when. I have no doubts that the nuclear alternative will be prohibitively expensive once risk factors are better taken into account (accidents, waste management, terrorism, etc).